I was asked by Amateur Gardening magazine to make a Show Garden for them in 2008 at their annual gardening show near Bath so I leapt at the chance of creating something a little different for their mainly traditional audience.

Having just taken a group of Americans from the Ohio Governor’s Residence around 23 traditional and contemporary Cotswold gardens, I was not surprised that it was the contemporary ones (such as Lady Farm near Bristol) that really captured their imagination. Many people have the misconception that contemporary gardens are all about concrete and spiky (or no) plants, whereas in fact I believe we’re in a much softer space than that.

CONTEMPORARY GARDENS ARE VERY ORGANIC AND NATURAL, AND WHILE MODERN MATERIALS CAN AND DO FEATURE IN NEW GARDENS, SO TOO DO WOOD, STONE AND WATER

The garden I designed for Amateur Gardening was contemporary and deceptively simple – I say deceptively because in order to work successfully it had to be beautifully detailed and built with absolute precision – not an easy task with just a few days to build it, and certainly not helped by being built through three days of torrential rain!

My intention had been to allow visitors onto the garden, but unfortunately the weather prevented this. But with this in mind, I created a square garden that was symmetrical about the diagonal axis, with a corner deck, Portland stone bridges over an L-shaped pool surrounded by meadow-style planting in warm, rich colours.

Having the plants wrapped around the outside of the garden meant that the inviting interior was viewed through a mist of planting, an idea that I use a lot in gardens that I make, so that even in a tiny space there is room for a little anticipation and mystery.

AND SUMMER’S LEASE HATH ALL TOO SHORT A DATE

Just before the show opened, Amateur Gardening asked me what I was calling the garden and to be honest, I hadn’t until that point given it any thought! However, it was early September, the weather was appalling, the summer had been pretty poor too, and so Summer’s Lease it was.

The garden also features some key themes of mine, specifically contrasting deliberate and rigid vertical and horizontal geometry against a looseness of planting. I created a wooden screen with flat horizontal planes and large metal upright posts and then repeated this to create a vertical focal point within the core of the garden and also a ‘pergola’ feature which contained and balanced the rendered walls that enclosed the deck. I also used the same materials and styling to create an inbuilt bench, and framed this with two borrowed beautiful corten steel planters with some fantastic Pennisetum Tall Tails from the lovely Neil at Knoll Gardens

This garden was made by Original Landscapes, who have made a number of gardens for me, including the multi-award winning VILLAGE garden. 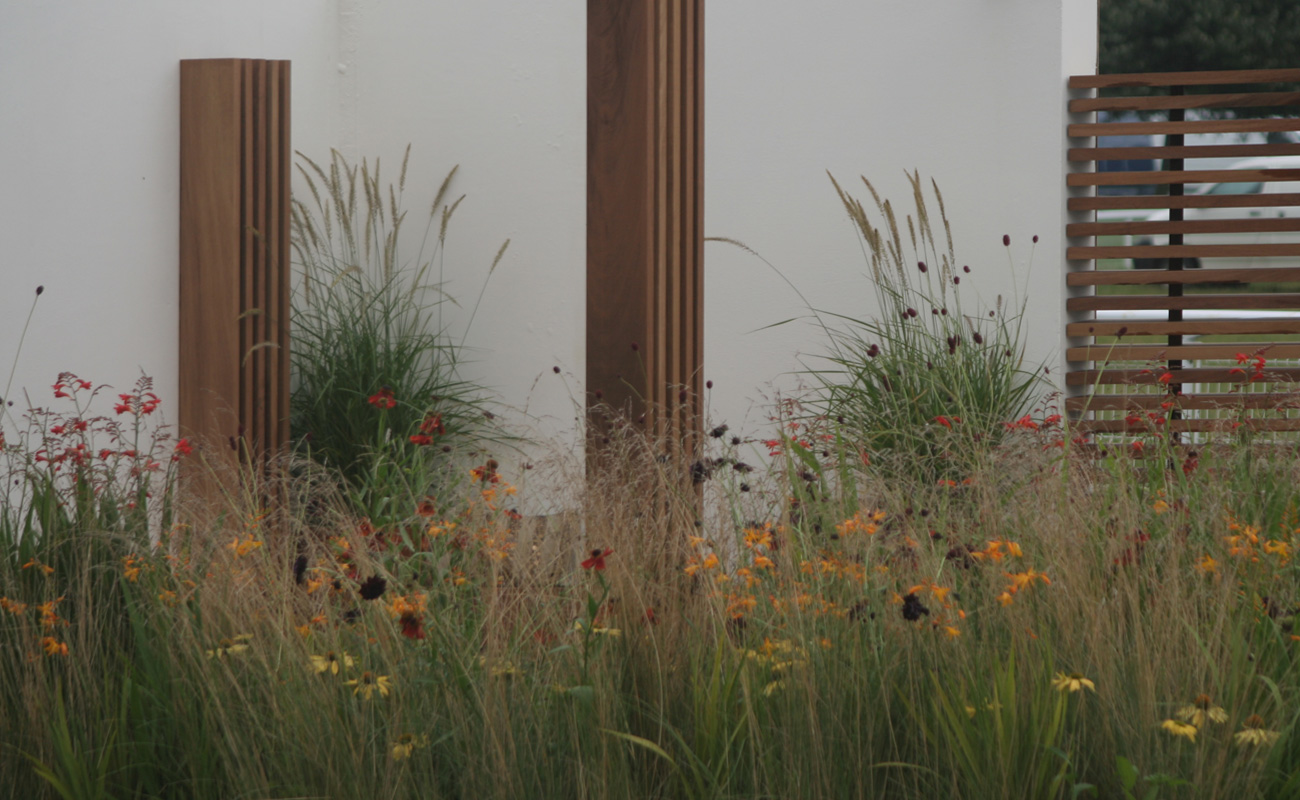 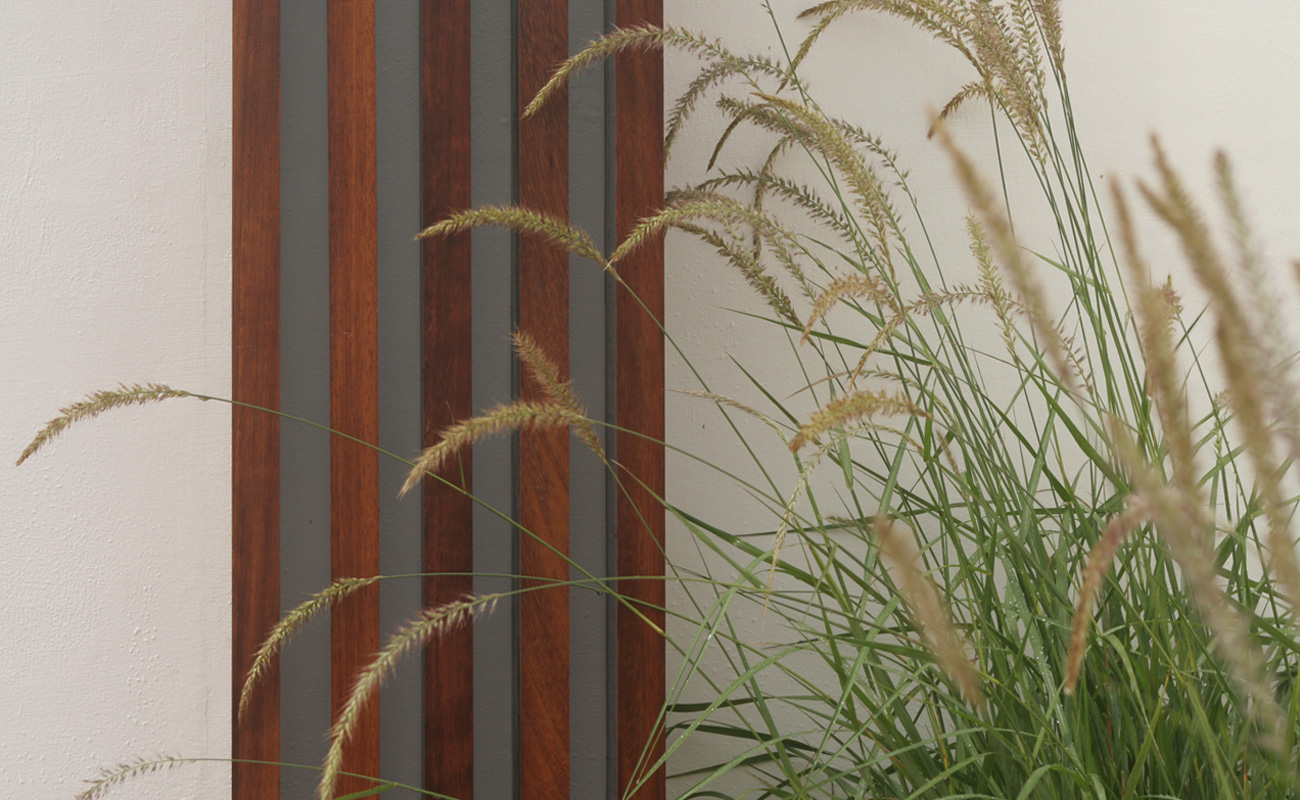 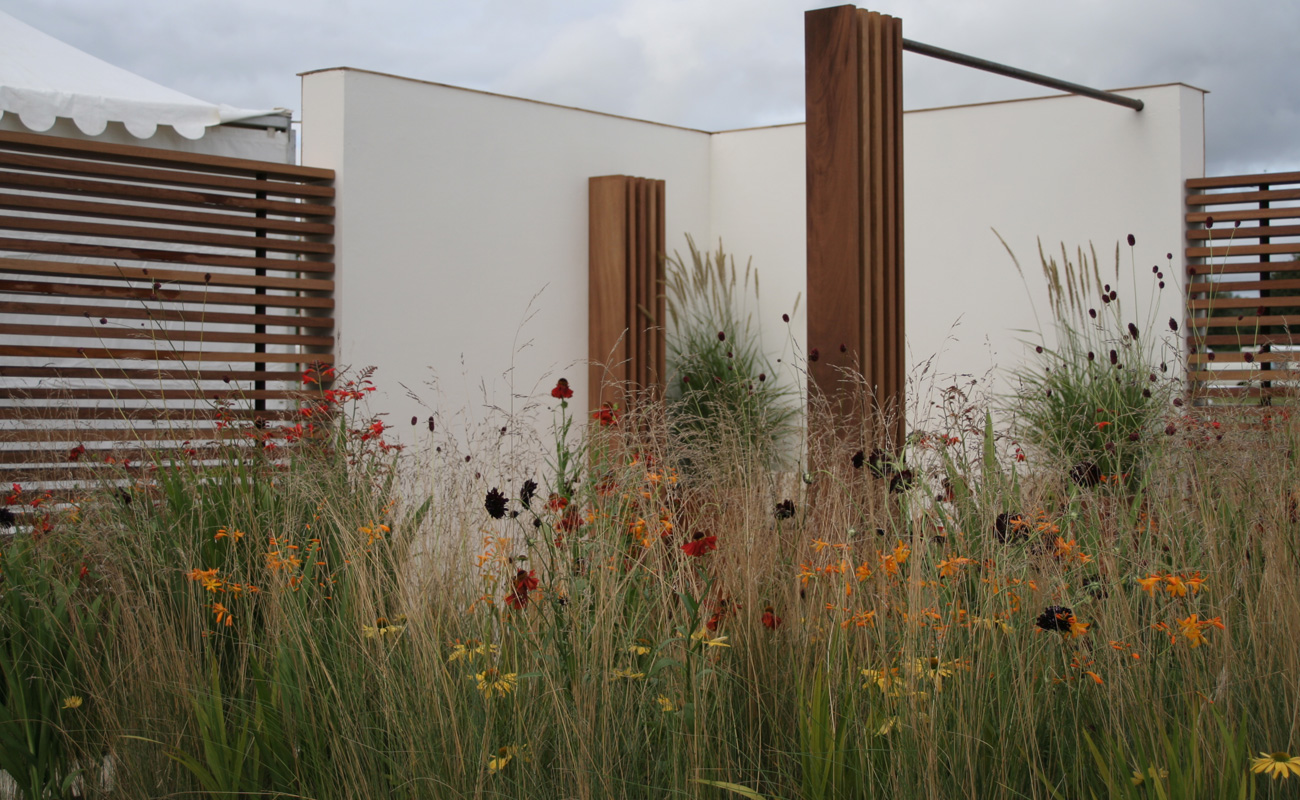 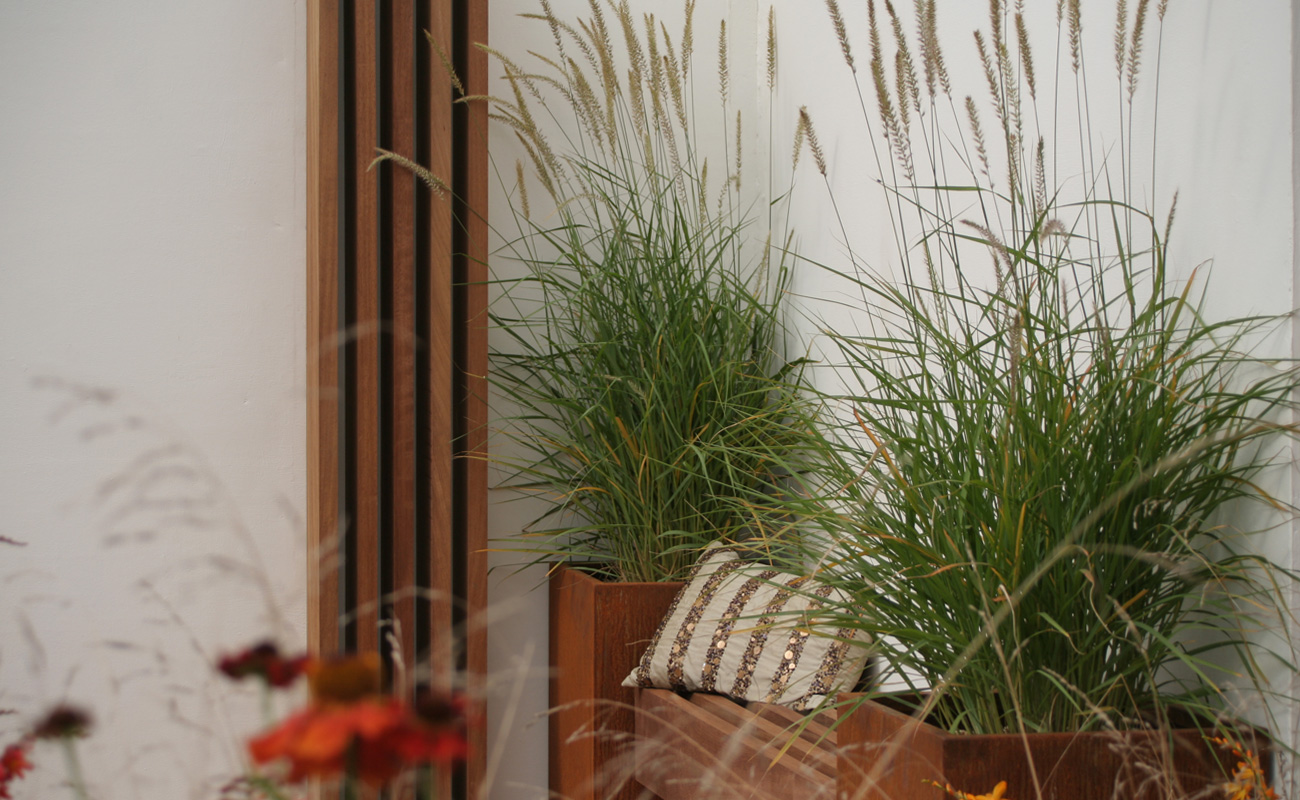 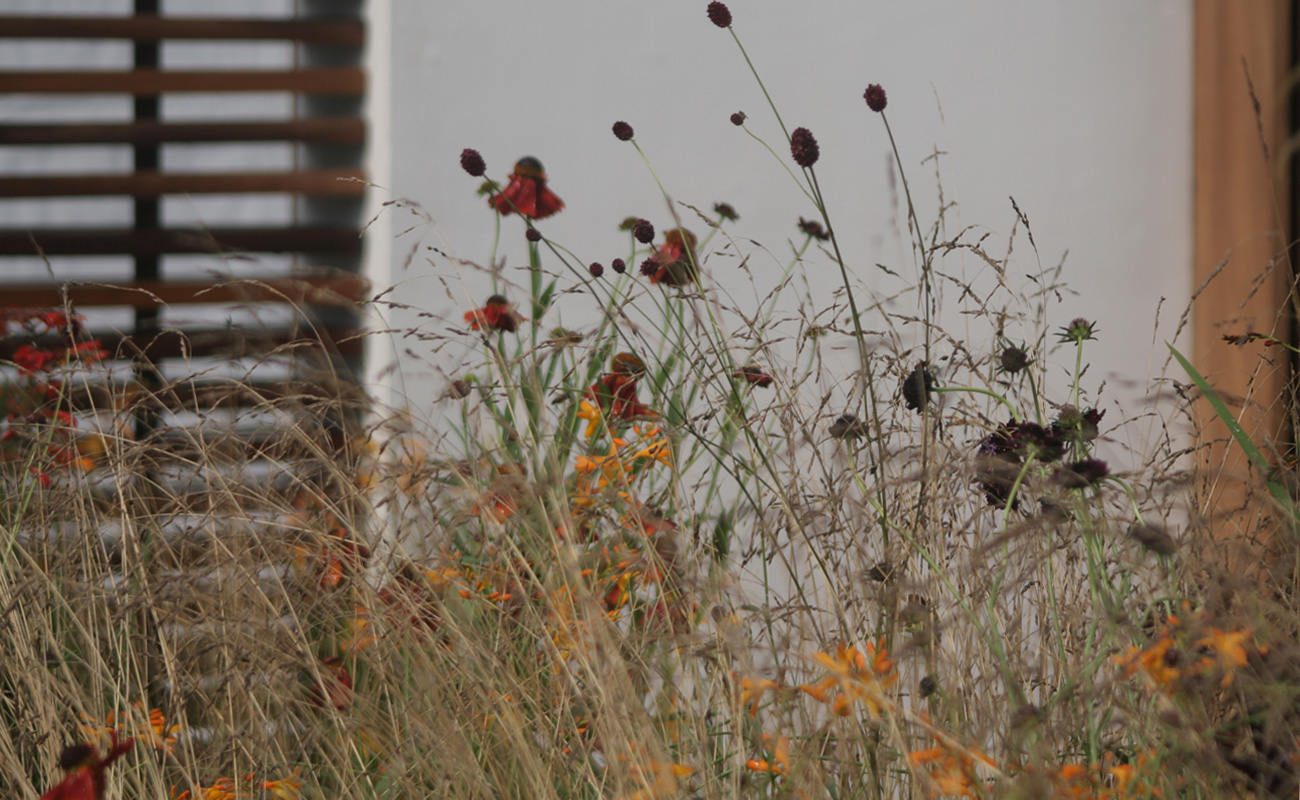 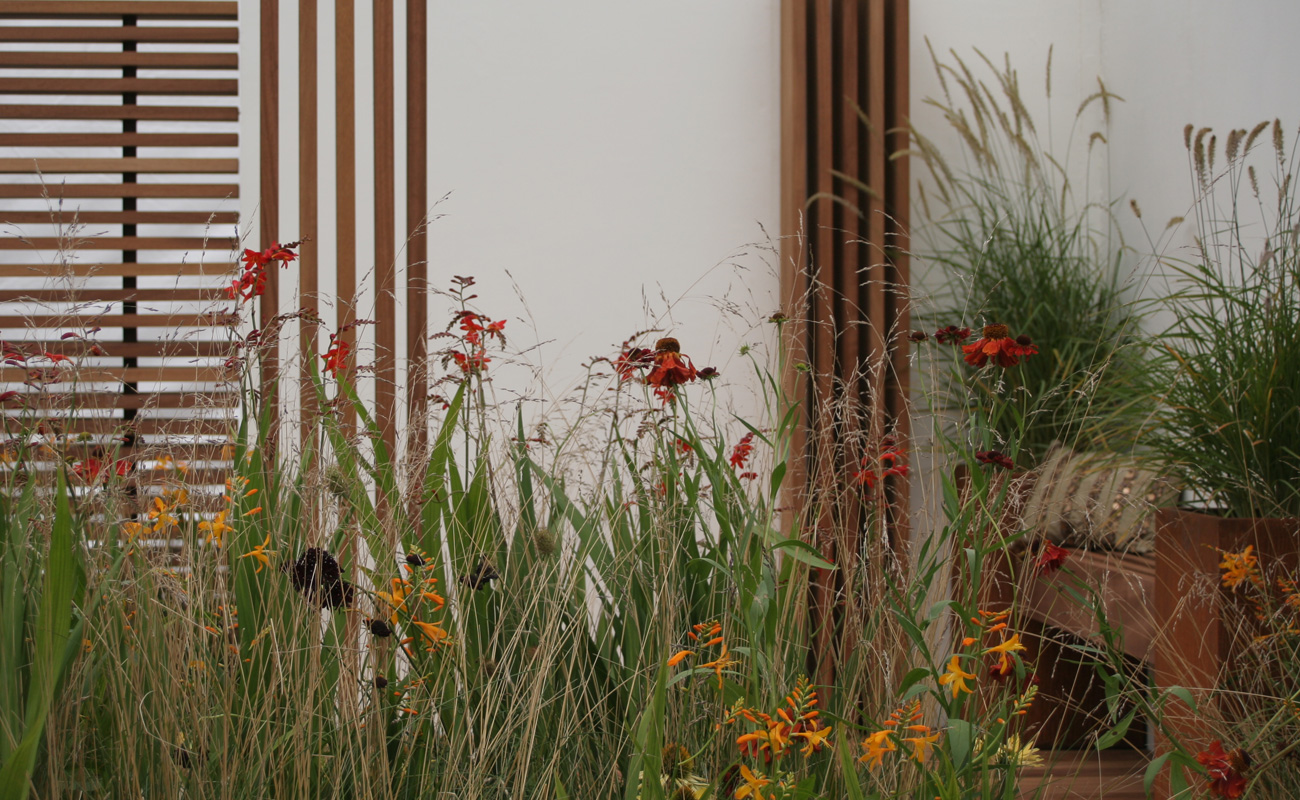 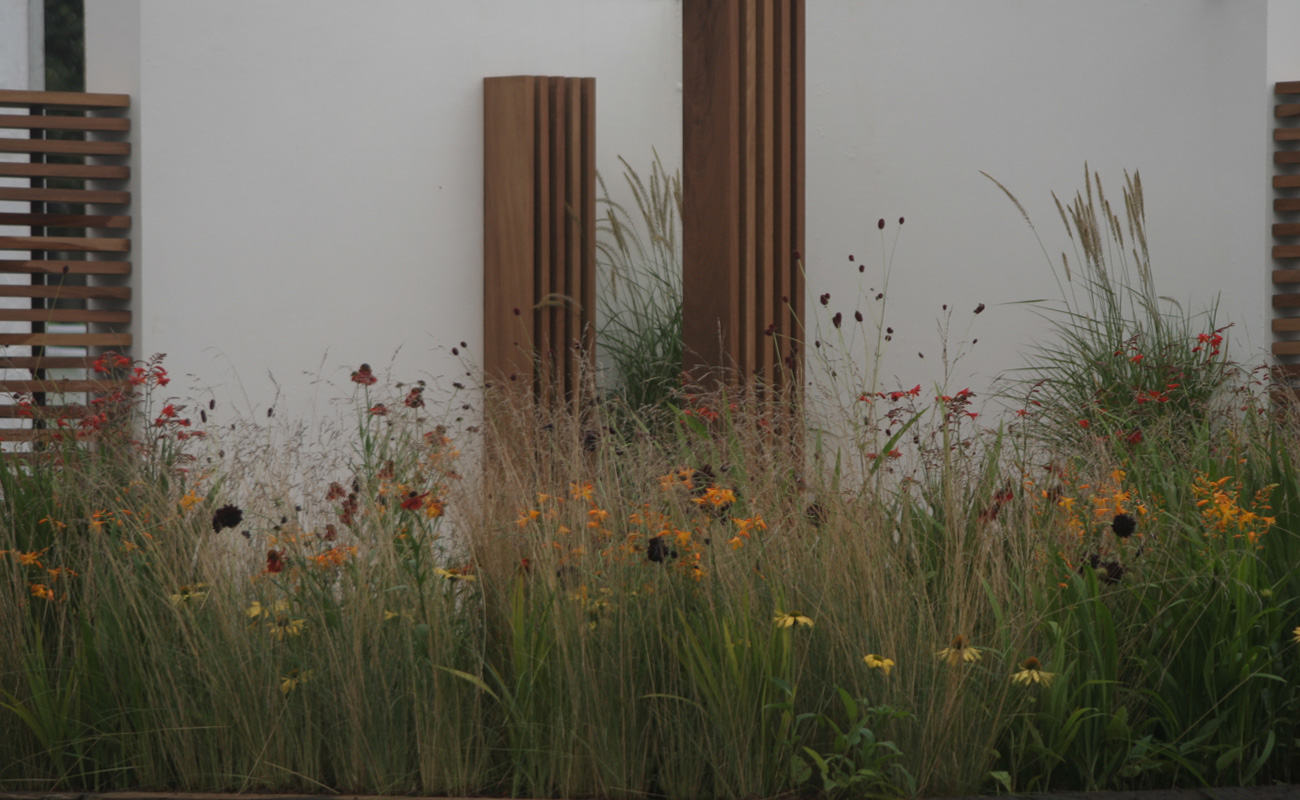 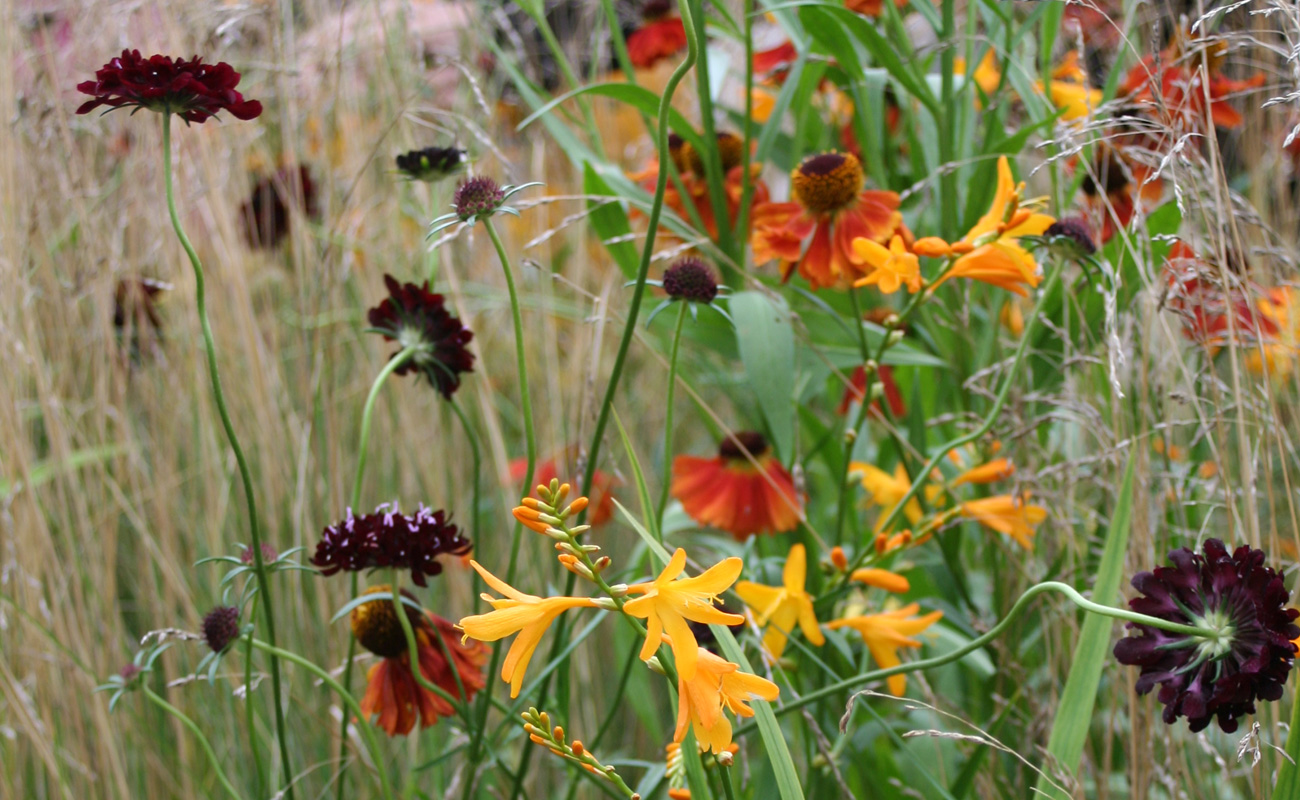 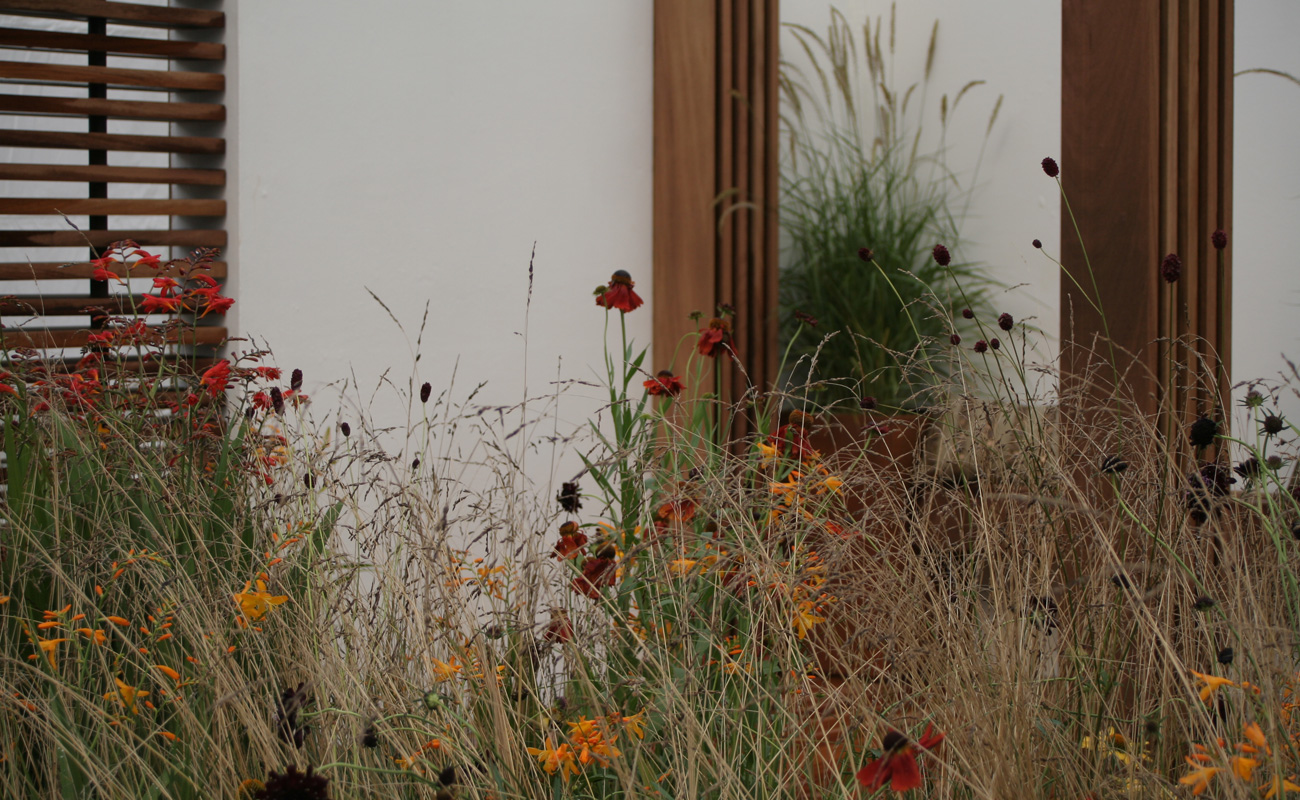