I’ve just come back from a trip to Ohio where I was delivering a series of lectures at Lakeside Chautauqua on the shores of Lake Erie, was guest of honour at various events at the Governor’s Residence in Columbus and in between times was visiting gardens and natural habitats and meeting local experts including Guy Denny, former Chief of Natural Areas and Preserves for the Ohio Department of Natural Resources, and Dewey Hollister, garden designer and native plant expert who has been involved from the start with the Heritage Garden that Hope Taft created at the Governor’s Residence.

Above, from left, Hope Taft, former First Lady of Ohio, Dewey Hollister, me and Guy Denny

I gave four talks at Lakeside, following on one from another, on the subject of ‘All Gardening is Landscape Painting’; Towards a New Naturalism, the quote being from William Kent, the ‘father’ of the English Landscape Movement.  With my art background, I’ve always been astonished that there isn’t more crossover between art and garden design, and so my first two lectures were on the Principles and Elements of art and how they can be used to create the space of a garden.  A knowledge of these elements allows you to understand why certain spaces work and how to manipulate space to achieve a specific and, more importantly, deliberate effect.  For instance, when starting a painting, I decide what to paint and what mood I want to create and then use the Principles and Elements to help me achieve that – ie the important decisions are taken before I start on the canvas, but with gardens most people act intuitively, and with mixed success!  The Principles can be described in cooking terms as what you want to make, so essentially involve components of composition such as proportion, focus and rhythm, where the Elements can be likened to the ingredients and include line, colour and value.  To illustrate the ideas, I showed a series of paintings, quotes and gardens.

Lectures 3 and 4 concentrated on planting, using metaphors of the blank canvas and palette.  I’m very influenced by natural spaces and like to create pseudo-naturalistic planting schemes which fit well with a modern aesthetic (have a look at the wonderful scheme at neoBankside near the Tate Modern for an example).  Using a proportion of local or native plants, in addition to more traditional garden plants, allows a garden to ‘feel right’ in its environment, and, I believe, is one of the major contributing factors in achieving a sense of place.  As an example, I showed a photograph of my local coffee shop, Vintage Rose, which is an independent cafe in Storrington, followed by a photograph of a Starbucks – illustrating the point that if all our gardens use the same plants it becomes irrelevant where in the world you are and the sense of place is lost.

I didn’t realise before visiting Ohio just how pertinent this choice of topic was.

This trip came about as over the last 8 years I’ve run a number of bespoke garden tours for the former First Lady of Ohio, Hope Taft, making friends for life amongst the group, and forming a strong bond between us all.  While in office Mrs Taft created a Heritage Garden at the Governor’s Residence to showcase the native flora of Ohio, and the tours I’ve run for her, and the lectures I have just given, have been fundraisers for the Garden.  These tours have taken us to the Cotswolds, Provence and Tuscany and I’m currently planning a tour of the Netherlands for them for next year. 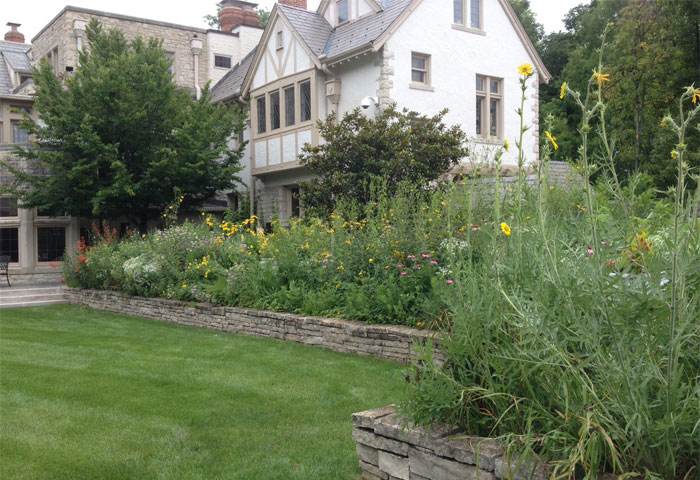 During the Italian tour, a plot was hatched by the group to ‘get Amanda to Ohio’ and this culminated in the trip of a lifetime for me.  I started in Columbus where I finally got to see the Heritage Garden for myself (above, the prairie garden), meeting many of the volunteers who maintain the garden at a wonderful lunch with centrepieces of giant tea cups adorned with US and UK flags!

The tables were also laid with what I thought was Pimms – what a nice touch, I thought, to have an English drink!  So it was a bit of a surprise on a first sip to discover it was, of course, iced tea (well it was my first day in the States, I got wise after that).

A fundraiser was then held at the Residence a few days later (below) with an English tea (scones and cream, of course) and I gave a short address to the attendees on the topic of ‘Sowing seeds here and abroad’ where I recounted a few of the many stories of people met and friendships forged through gardening connections, with a few anecdotes from my Chelsea experiences (including the embarrassing one!)

In between these two events, I was able to visit a number of gardens and prairies.  As I use a large proportion of prairie plants in my planting schemes, including Echinacea, Veronicastrums and various grasses, I was really excited to see how these plants co-exist in their natural environment.  Prairie plants flower later in the season than an English meadow and with a warmer colour palette, and the flowers were just coming into bloom while I was there.  Much to my excitement, I also saw hummingbirds, rather wonderful red-winged blackbirds, robins (but not as we know them) and even a bald eagle.

Guy Denny has created a wonderful prairie of his own, which was a real treat for me to visit. He told me that he had been willing the lilies to flower for the days before I arrived, with success as you can see!

We have worked hard in England to re-establish habits for rare birds and mammals and now take for granted sights that were unknown a couple of decades ago – road verges brimming with cow parsley and meadow flowers, and a resurgence in the populations of hawks and otters amongst others, but the Americans are a little behind us in their approach to landscape and gardens.  I was surprised to see all the verges of houses and roadsides mown to within an inch of their lives and can see now that the Heritage Garden at the Governor’s Residence is not just ahead of its time but also essential in showcasing the beauty of the natural heritage of Ohio and the relevance of this flora to the ecological balance and diversity of the region.  With many gardeners there unaware of the damaging effects of some of their gardening practices (30% of the US domestic water usage is for irrigation, mainly for lawns), there had never been a better time to be able to inform and inspire about the benefits, both for wildlife and for aesthetic reasons, of creating more naturalistic planting schemes.

And as you can see, it wasn’t just me enjoying it, despite the rain!

But I’ll leave you with a photo of Aesculus parviflora (dwarf buckeye), below, which is the state plant of Ohio.  It’s a large shrubby horse chestnut with wonderfully airy flowers that cover the plant right down to the ground and I’m surprised never to have seen it in the UK!

We use cookies on our website to give you the most relevant experience by remembering your preferences and repeat visits. By clicking “Accept All”, you consent to the use of ALL the cookies. However, you may visit "Cookie Settings" to provide a controlled consent.
Cookie SettingsAccept All
Manage consent

This website uses cookies to improve your experience while you navigate through the website. Out of these, the cookies that are categorized as necessary are stored on your browser as they are essential for the working of basic functionalities of the website. We also use third-party cookies that help us analyze and understand how you use this website. These cookies will be stored in your browser only with your consent. You also have the option to opt-out of these cookies. But opting out of some of these cookies may affect your browsing experience.

Privacy Policy
Necessary Always Enabled
Necessary cookies are absolutely essential for the website to function properly. These cookies ensure basic functionalities and security features of the website, anonymously.
Functional
Functional cookies help to perform certain functionalities like sharing the content of the website on social media platforms, collect feedbacks, and other third-party features.
Performance
Performance cookies are used to understand and analyze the key performance indexes of the website which helps in delivering a better user experience for the visitors.
Analytics
Analytical cookies are used to understand how visitors interact with the website. These cookies help provide information on metrics the number of visitors, bounce rate, traffic source, etc.
Advertisement
Advertisement cookies are used to provide visitors with relevant ads and marketing campaigns. These cookies track visitors across websites and collect information to provide customized ads.
Others
Other uncategorized cookies are those that are being analyzed and have not been classified into a category as yet.
SAVE & ACCEPT